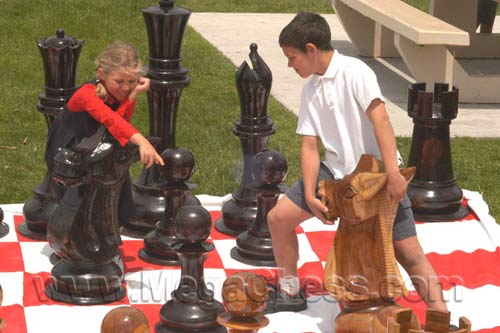 Every year when I was a kid, and still when I get the chance, I used to go up to a festival called the Renaissance Faire. Its basically a big outdoor carnival where everyone dresses up in armor and clothes from the middle ages, walks around with swords and crossbows and maces, and basically acts like it is the Renaissance. The centerpiece of the day was always a giant chess match, where the pieces were played by actual humans, characters who moved across the board according to the whims of the royalty who were playing the game. When one piece took another, there was always an inevitable battle, the winner of which would come out having conquered the square.

This game has always captured my imagination. That is why when I saw the site http://www.megachess.com I got really excited. You can see from the picture above that the store specializes in offering a variety of huge chess sets,. made from various materials and in various styles.

The biggest chess set I saw was made from hand carved teak and stood 6 feet tall!

Look at that! wouldn’t that be awesome, to walk into a house and have an army of giant chess men peering down at you, daring you to take up the challenge. I mean, if size is luxury, this set has no pear as far as being a piece of impressive home decor.

Now some of us don’t have a whole room to dedicate to a giant chess set. Luckily in this model, and several others, they are willing to offer you the pieces individually. That means you can just buy a knight and use him to guard the entranceway to your home. Or you can buy a king and queen and couple them as a romantic centerpiece in the bedroom. You could even purchase the pawns, and use them to line a walkway. 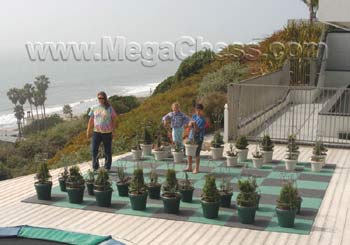 This is another really innovative chess set that they offer. I have a feeling this may be the result of a compromise between a big kid that wanted a giant chess set, and a more moderate companion that wanted a flower or herb garden.

Here the chess pieces are wire frames mounted on potted plants. The greenery makes the set attractive, and natural, and gives it a purpose above and beyond that of just being a chess set.

They also offer the chess pieces as just wire frames without the plants. The advantage of this is that the pieces are extremely light weight, making it much easier to play with them.

Finally I had to talk about their teddy bear chess product. I think this is just the most adorable product around. They basically take several different sized teddy bears, and they dress them up in chess outfits. Then they use a roll up chess mat as the playing board. What a great way to get kids excited about chess! I mean, even I want one.

In a world where every store looks the same, has the same products, offers the same specials, and is basically a clone of everyone else, it is really refreshing to see a site like this one.

This entry was posted on Thursday, November 8th, 2007 at 7:07 pm and is filed under chess sites, Site Reviews. You can follow any responses to this entry through the RSS 2.0 feed. You can leave a response, or trackback from your own site.