A picture really does speak a thousand words. Now I’m not as much into collectible chess sets as some of the other guys here, like Jim who is constantly coming up with new chess designs. Its almost annoying, he’s like a little kid running in every 5 minutes to tell me about his latest chess creations.

However, despite my stylistic predilections, today I found a website that may have swayed me. My-Chess-Set.com has apparently been one of the leading chess retailers for quite a while now, but I only recently stumbled on them while researching an article on home libraries. Honestly, they have some of the most exquisite chess sets I have ever seen. And the way they lay them out and present them, huge pictures, simple navigation, it really makes it easy to consider one of having these pieces in your home.

First of all I would like to talk about the picture above of the Knights metal chess set from Manopoulous.

Since the pieces don’t have the standard chess look, the set is really unique, and can add a lot of character to a house. Also, they allow chess to be more than a game or a toy, it can actually be a stylish addition to your home.

The second chess set I would like to talk about is the black and brown alabaster chess set Made in Chiellini Italy, this set is really powerful, due mostly to the intense natural features which are found in the pieces and the matching board.

I love that a set which is so stylish, elegant, and refined, is made from all natural alabaster. The fact that this natural material was used gives the set an inherent strength which a simulated material would not be able to match.

So I finally found a chess store that has actually made me consider buying a set. And if anyone says I told you so, you had better watch out! 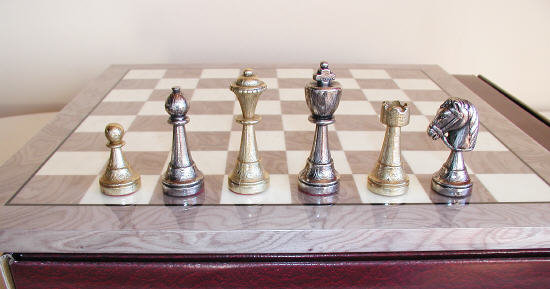 This entry was posted on Wednesday, November 28th, 2007 at 5:16 pm and is filed under chess sites, Site Reviews. You can follow any responses to this entry through the RSS 2.0 feed. You can leave a response, or trackback from your own site.